Delen op Facebook Opslaan
Robin was a British weekly children's magazine published from 1953 to 1969
Originally by Hulton Press. Associated annuals were also produced, the first dated 1954, until at least the ninth in 1962. Robin was billed as Companion to Eagle, Girl and Swift, and aimed at younger readers and pre-readers. Both the weeklies and annuals were originally edited by Marcus Morris, but by 1962 Clifford Makins had become editor. In 1969 Robin was merged into Playhour. Regular comic strip features included: Andy Pandy, based on the BBC television series. Harriet and Smith, about a girl Harriet and her cat Smith Johnny Bull Flower Pot Men, based on the BBC television series. Midge the little motor-car Princess Tai-Lu, about a siamese cat able to do magic, and her friends Gwladys, Ivor, Mr. Tonkins and Jed. Richard Lion, which followed the adventures of Richard and his friends Henry the kangaroo, Pug the bulldog, Peggy the black panther, Nemo the jester and others. The twins Simon and Sally Tom the Tractor Tubby the Odd-job Engine, the adventures of a little tank engine and his slightly eccentric, bearded driver Mr. Pickles. The story of Woppit, which followed the adventures of a bear-like creature Woppit and his friends Tiptop the scarecrow, Mokey the donkey and Mrs. Bumble. The Woppit character was produced as a bear by Merrythought. One of these bears, Mr Whoppit, became the mascot of land and water speed record breaker Donald Campbell. Other items included games and puzzles, stories in prose both fictional and true life, poems, colouring-in, and craft projects. Artists who worked on Robin included Sabine Schweitzer, Reg Foster and Robert Williams. 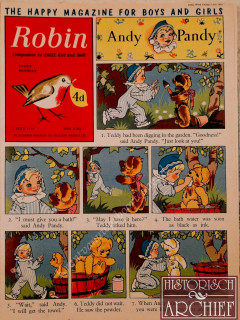